And how to use failure as a guidepost. At a recent business conference, a young professional walked on stage to deliver the final keynote. With confidence, he stated:

“Failure is the tool I use to figure out if we are really being ambitious enough.”

Jason Silver was speaking about his experience working with Airbnb as the Growth Lead for their newly expanding Canadian market. To launch his Airbnb career three years prior, he was flown out to the San Francisco headquarters to present his strategy in front of senior leadership (all of whom were also young professionals). Silver was sure he had blown them away with his incredible plan to increase revenue by 10% in the next year. But those brash young execs turned him back and said he needed to think bigger, bolder and reimagine his strategy. His presentation had failed, but Silver was just getting started.

“If you fail and it’s not crippling to your business, then you’ll be improving and getting better at what your do. You’re trying something new and progressing.”

Airbnb wanted Silver to fail. They wanted him to feel the sting of defeat so that he could completely change his approach.

On his flight back home that same day, Silver scrapped everything he had been working on. He reinvented a completely new strategy from the ground up, and in that first year as Growth Lead their team proudly accomplished 9 times the growth they originally forecast. It was an unbelievable accomplishment. Silver had quickly learned that failing at Airbnb wasn’t the end – it was a tool to get to a better strategy.

Now, Silver advocates three steps to change the framework for failure – and it all revolves around being innovative.

“The right questions will lead you down a path that can change your business, industry or even the world.”

So what are the right questions?

These are not the conventional ones that everyone else is asking. Ask a question that reframes the problem, so you attack it from a completely different angle. Twitter lit up with Jason’s quotes and advice, including user @ColleenMCole who tweeted the above.

When creating smartphones, Silver suggests that the questions may have taken a successful company like Apple down roads less traveled. A conventional question would ask, “How can we make a better mobile phone?” This would constrain the company to the status quo and make an incremental improvement. They would likely end up with a version 2.0 of the same phone.

But with innovative questioning, another company could ask, “How can I carry around the power of a computer in my pocket?” This forces the company into new territory, raising new and innovative questions, and ending up with a brand new product like the iPhone when no other devices on the market compare.

2. Imagine a vision, realize it with data.

Imagine the world or your business as you want it to be, and then use data to realize that vision.

This can be seen as a form of goal setting – forcing you to dream and think beyond your standard goals. Be bold and envision what you’ve always wanted to achieve with your business. Don’t let real or imaginary roadblocks get in your way. Remember that your strategic creativity is capable of getting around any roadblock as long as you truly want to realize your vision.

Silver recommends using supporting data that can help you answer the innovative questions and realize the vision. Starting with a clear path that you believe in and using real world data points to find a solution will create a more successful reality. The reverse – starting with data points at hand and then developing your vision around those – will restrict your growth and put limits on what you can achieve.

“Business grows by learning from what doesn’t work,” Silver stated. “Embracing failure is incredibly difficult. The key is making mistakes and then always learning from that.”

Airbnb operates in over 34,000 cities and 19 countries, constantly adding more locations and dealing with incredibly challenging rental environments. With 100 million total travelers in Airbnb’s system, Silver explained that the company needed to fail to grow to that level. If the company was afraid to fail, they would absolutely fail.

“Don’t turn a blind eye to negative results,” Silver cautioned, going on to explain that the entire team from top to bottom needs to be on board with the culture to learn from failure. “Shareholders don’t like failure because they want to see ROI. Everyone has to be bought into this because the worst thing you can do is start down the path and then want to go back. 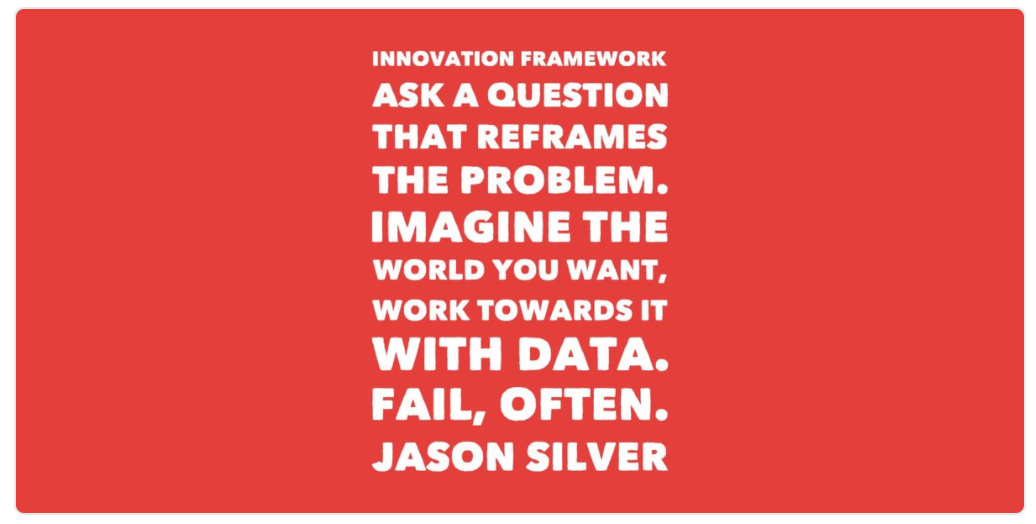 If you fail, and you should, go back to step one.

Ask more new questions. Use data and analytics to prove and disprove your theories, and to support your strong vision. Then never forget to fail again.