As a business leader, can you overcome adversity & daily pressures? Here’s why your resilience matters most & how to bounce back. As far as inspirational commencement speeches go, it was a bit of a shocker.

When chief justice John Roberts of the United States Supreme Court addressed a graduating class in 2017, he wished them … bad luck.

“From time to time in the years to come, I hope you will be treated unfairly so that you will come to know the value of justice,” he said. “I wish you bad luck, again, from time to time so that you will be conscious of the role of chance in life and understand that your success is not completely deserved and that the failure of others is not completely deserved either.”

Only by experiencing adversity, Roberts suggested, can we develop the crucial quality we need to get us through it: resilience.

From Nietzsche to Kelly Clarkson

As a business leader, being ‘resilient’ allows you to “withstand or recover quickly from difficult conditions,” which you may face both internally and externally. An economic downturn, a market disruption, a botched expansion. A cancelled contract, an inventory snafu, a product that sinks like a stone. Unpaid invoices, unforeseen logistical roadblocks, or an employee who is underperforming.

How do you muster up the strength and courage to face the daily onslaught of challenges? Some will chalk it up to ‘entrepreneurial spirit,’ but author and psychologist, George Kohlrieser, points to resilience as the key. He defines this quality a step further, as it pertains to corporate and organizational leadership:

“Resilience is the human capacity to meet adversity, setbacks and trauma, and then recover from them in order to live life fully. Resilient leaders have the ability to sustain their energy level under pressure, to cope with disruptive changes and adapt. They bounce back from setbacks. They also overcome major difficulties without engaging in dysfunctional behavior or harming others.”

To paraphrase Nietzsche – and a Kelly Clarkson song — “what doesn’t kill you makes you stronger.”

So what does resilient leadership look like? These snapshots may give you an idea. But New Coke fell flat. Coca-Cola was bombarded with thousands of angry calls and letters demanding the return of the original flavor. Just 79 days after introducing New Coke, Goizueta owned up to his mistake and brought the ‘old’ Coke back.

What went wrong? People’s hearts – their intense emotions about a century-old brand – simply overruled their taste buds. Goizueta learned that even if your business seemingly takes all the right steps (remember the 200,000 blind taste tests?) things can still go horribly wrong.

Despite your best planning and execution, failure will sometimes happen. Accept that. Expect that. And if it happens to you, learn from it.

Resilience is about being realistic

For James Stockdale, former U.S. vice-presidential candidate and high-ranking naval officer, taking a realistic view proved to be his saving grace. Although Stockdale survived seven years of torture and imprisonment during the Vietnam War, many of his fellow POWs tragically did not.

As he explained to now famous business author Jim Collins, the most optimistic prisoners were, surprisingly, the least likely to make it out alive:

Collins calls this the Stockdale Paradox, and warns business leaders of its dangers in his bestselling book Good To Great. As he further explains, “you must never confuse faith that you will prevail in the end — which you can never afford to lose — with the discipline to confront the most brutal facts of your current reality, whatever they may be.”

Being resilient means being realistic about your situation, not deluding yourself with false optimism. It’s not about being ‘perfect’

Roy Halladay won a lot of things, including two Cy Young Awards and a place in the Baseball Hall of Fame. Yet the pitcher’s relentless pursuit of perfection cost him his life.

After Halladay fatally crashed his small plane in 2017, an autopsy revealed morphine, alcohol, antidepressants and amphetamines in his system. How could someone so perfectly in control out on the baseball field spiral so out of control in his life?

Biographer Todd Zolecki says Halladay’s constant overtraining and insistence on playing for decades after a spinal fracture, ultimately led to his addiction and downfall. “Because he was so determined, he just felt like he needed to push through it, even though he was in such tremendous pain. But he just couldn’t walk away. He could never turn off the ‘I have to go max effort’ switch,” as Zolecki explained.

In the battle of resilience vs. perfection, the baseball star’s loved ones could see he was not able to overcome and bounce back. Brandy Halladay told Zolecki her husband’s quest for a perfect career took a toll on the most important team of all – his family. As she described, “everyone else [was] getting the hero and we’re getting what’s left over.” Instead of even spending time with their kids, he was left struggling with his physical and emotional pain. When we experience a rough patch, it’s often easy to dig yourself a hole and focus only on the negative side of things. Author and business coach Paula Hope defines this as your inner “Saboteur” as she explains in her book focused on conquering negative thoughts that can equally impact your sales revenue.

Part of being resilient, as we have now come to understand, is to be able to overcome being knocked down. It’s important, regardless of the Saboteur’s intensity, that you don’t let it affect your confidence as well as your business performance. You will not be able to move forward without ridding yourself of those personal fears and doubts. 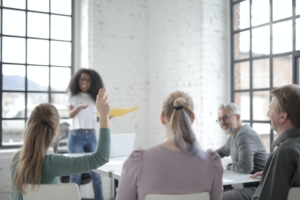 Don’t be afraid to ask for help

Perfection is impossible. Instead, reach for the inner strength to bounce back, instead of bending to the point where you (or those around you) completely break. Take care of yourself personally as well as professionally. And when you need help, reach out for it.

Next up: How asset-based lending work

Business owners and entrepreneurs will undoubtedly face financing issues and new opportunities requiring access to working capital. If you are searching for ways to overcome one of these challenges, reach out and we’ll provide you with information and options to explore.

Images from Pexels, and Pixabay